If you’re in the market for a smart speaker, then you’ve probably heard of the Amazon Echo Dot. It’s the most popular of the Amazon smart speakers and is available in four versions. But how do you choose the right Echo Dot for your home? With different versions of Echo Dots available, and each one offering unique features, it’s incredibly difficult to know which Echo Dot to buy.

In this article, we’ll compare the latest two versions, the Echo Dot 3rd generation, and the Echo Dot 4th generation. Read on to decide which is best for your home.

Echo Dot 3 vs 4: Side by Side Comparison

Echo Dots are easily affordable. All generations of Echo Dots are below $65, making them one of the most affordable smart speakers on the market. Echo Dot 3 is typically sold between $35 – $40, while Echo Dot 4 costs between $45 – $50. Echo Dot 4, with a clock, costs $10 more than the regular Dot 4, which means that it is available for $60.

Even though Echo Dot 3 and 4 are very affordable, they get much cheaper during Amazon prime deals and Black Friday sales. Echo Dot 4 costs slightly more than Echo Dot 3, but the Echo Dot 4th Generation has better audio quality and a more refined appearance, which makes it worth its price.

Echo Dot 3 and 4 both have amazing audio output. Echo Dot 3 has a 1.6-inch speaker, unlike its predecessor, the Echo Dot 2nd Generation, which has a 1.1-inch speaker. The increase in size gave Echo Dot 3 a better sound output compared to older Echo Dot generations.

Echo Dot 4 also has a 1.6-inch speaker. Just like Echo Dot 3, the Echo Dot 4th Generation also boasts a 3.5mm headphone jack. However, with Echo Dot 4, you can play loud music with less speaker vibration. It also has an overall better sound quality. 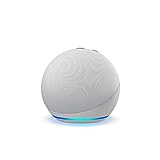 When it comes to smart home connectivity, both speakers are compatible with Alexa. While Echo Dot 3 and 4 offer similar experiences with Alexa, the assistant’s processing and responsiveness are slightly faster on Echo Dot 4 because it uses the AZ1 Neutral Edge Chip. Just like the previous Echo Dot generations, Echo Dot 4 can be used to control the smart home-compatible devices in your house, and it does so with less delay because of its upgraded chip.

Echo Dot 3 and the Echo Dot 4th Generation have several shared features, such as the Alexa technology. Newer features, such as Care Hub and Alexa Guard Plus, are also present in Echo Dot 4. Care Hub allows you to feel closer to your elderly loved ones and check in on them easily, even when you are miles apart. Guard Plus is a subscription service that enables your Echo speaker to detect threats, notify you immediately, and connect you to emergency responders.

However, Echo Dot 4 offers many unique features in an eco-friendly manner. Most of the materials used include aluminum, plastic, and fabrics that are all recycled items. It’s also highly energy efficient.

Echo Dot 3 vs 4: Which One is Better? Which One Should You Use?

Echo Dot 3 and its 4th generation successor offer high sound quality. They are both Alexa-compatible speakers. Better still, with Alexa Guard, the smart speakers can notify you of threats in your house. The Echo Dot 3 is the more affordable option, but it doesn’t have as many features as the Echo Dot 4. The Echo Dot 4 has an improved sound quality. It is one of the most eco-friendly smart speakers on the market right now and has more improved features than the Echo Dot 3, which is why we recommend it.

Echo Dot 3 vs 4: Which Is Better? FAQs (Frequently Asked Questions)

What is the difference between Echo Dot and Echo Show?

Amazon Echo Show is a voice-controlled smart speaker that provides visual information—such as the weather, news, and music lyrics—with touch controls on a full HD screen. On the other hand, the Echo Dot doesn’t have a full HD screen. Some Echo Dots have LED displays that can show the time and temperature.

Yes, Echo Dots are eco-friendly. Eco Dot 4 is made of recycled aluminum, fabric, and plastic. It is also energy efficient.

Does my Echo Dot listen to my conversations?

Echo Dots start listening to your conversation when you say the ‘wake word’. However, newer Echo Dots have built-in microphone buttons which you can turn off at will if you are concerned about your privacy.

Is Echo Dot 4 worth the price?

Yes, Echo Dot 4 is worth its price. It offers rich and balanced sound quality and has a refined and elegant design. Its AZ1 Neutral Edge Chip also helps Alexa process information faster and respond faster than older Echo Dot generations.

How does the Echo Dot 4 work?

Echo Dot 4 is a smart speaker. It works with Alexa, a voice-controlled assistant which you can ask questions and give commands to. It will then connect to the Internet and provide you with information or carry out your requests. These can include playing music, setting an alarm, and controlling other devices in your house.

How do I control my Echo Dot 4 with my voice?

To control Echo Dot 4 with your voice, you will need to say “Alexa” followed by a question or command. For example, you could say “Alexa, what is the weather today?” or “Alexa, turn on the living room light.”

What are the benefits of Echo Dot 4?

Some benefits of Eco Dot 4 include that it is affordable, and easy to set up and use. It can aslo make your life more convenient by allowing you to control your smart home devices and access information hands-free.

Jerry Dale is a freelance writer who has been published in a variety of online and offline publications. He has a love for the outdoors, especially fishing, and enjoys novels in his spare time. Jerry is also interested in cryptocurrency and how it can shape the future of finance.