Apple’s AirPods have effectively dominated the wireless earbud market since their first release in 2016. However, not everyone has an Apple device. Furthermore, not everyone has loyalty to the Apple brand. For this reason, there’s competition among other wireless earbud brands for the runner-up spot. Amazon and Google — known for their Echo and Pixel brands — are neck-and-neck in this regard. But how do the Echo Buds vs Pixel Buds stack up against one another?

After several years and just as many earbuds released under their respective belts, it’s worth looking at the Echo Buds vs Pixel Buds and deciding which wireless earbuds are best. A full comparison of the two earbuds, including specs and pros and cons, will put things in perspective. Which of the two earbuds will come out on top?

As their opposing brand names suggest, Echo Buds vs Pixel Buds are distinct in some ways. From price to battery life to release date to current models, there are a few things that both earbuds would consider crossover territory.

Echo Buds have made little effort to try and differentiate their design from the AirPods, with its charging case looking almost identical to Apple’s (just in black instead of white). Amazon has never been one to have the most cutting-edge tech, so no wonder they want to try and step into a little bit of Apple’s spotlight with this obvious similarity.

The Pixel Buds have tried and failed a few times to create a distinct but similarly iconic look for their wireless earbuds. With their latest release, they’ve seemingly embraced the look of the AirPods case, as well. It just goes to show that, for all these earbuds attempt to do, neither one seems too determined to try and step away from Apple’s successful offering. 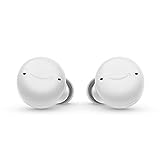 The History of Echo Buds

Amazon first debuted the Echo Buds in October of 2019. An obvious attempt to compete with Apple‘s AirPods and Google‘s Pixel Buds — both of which had already been out for years by 2019 — the Echo Buds arrived quite late to the party. Nevertheless, the Echo Buds rode on the Amazon brand name to success. Despite their late arrival, the Echo Buds managed to deliver a quality competitor to the comparable products from Amazon, Google, and other wireless earbud brands. Originally offered for $129.99, the first-generation product boasted Bose-branded noise reduction capabilities, and unique Alexa features innovative touch controls.

A second generation of the Echo Buds arrived a couple of years later, in May of 2021. These new and improved Echo Buds came in two options and price points: Echo Buds 2 with a wired charging case for $120 or Echo Buds 2 with a wireless charging case for $140. While the first generation Echo Buds seemed to exist only to pull potential customers away from the competition, the second generation made improvements across the board that better proved their worth. In an increasingly crowded field, these upgrades proved essential to continued success.

Beyond the lower price, Echo Buds 2 came with a fresh new look, much finer audio quality, and proper active noise cancellation (ANC). This second-generation product also made the Buds smaller in size and lighter in weight, which is always a good thing for in-ear electronics of this sort. Better yet, the product comes with several alternate tips and wings to further customize the fit. A corresponding app can also help test the Echo Buds’ fit to ensure proper fit further. Clearly, the second generation Echo Buds took an average offering and made it markedly stronger.

Arriving before the Echo Buds but after Apple’s AirPods, Google‘s Pixel Buds arrived early enough in the wireless earbuds boom to score a decent amount of customers. Alas, they also arrived late enough in the game to be subjected to plenty of criticisms in comparison Apple. From the first release of the Pixel Buds in November of 2017, critics and consumers alike took major issue with the look and feel of the Google product. Initially offered for $159, the first-generation Pixel Buds were torn apart for their goofy-looking fabric-covered clamshell case.

Then, of course, there was the issue of the wire. You see, these first-gen Pixel Buds were not truly wireless. A thin, black wire connected the two buds, proving to be a step down in technological capability from much of the competition (namely Apple). All in all, they were a pretty serious disappointment compared to the AirPods. For their second generation, released in 2020, Google returned to the drawing board. This proved to be the best possible move, as the Pixel Buds were able to completely turn things around with a top-to-bottom redesign of the product.

From 2020 on, the Pixel Buds — now truly wireless, sans connector cord and fabric case, albeit a bit more expensive — have seen much more positive reviews. While subsequent releases like the A-Series and Pro models have further increased prices, they’re finally able to stand next to the AirPods and Echo Buds. The noise-canceling Pixel Buds Pro has incredible battery life. Plus, at $200, they aren’t too expensive either. Like the Echo Buds, the Pixel Buds might still pale compared to the AirPods. But, for Android users, they aren’t a bad alternative at all.

Echo Buds vs Pixel Buds: Which Wireless Earbuds Are Best?

Echo Buds and Pixel Buds are two solid earbuds with pros and cons. Considering their specs and differences, it seems fair to crown the Echo Buds as the winner. Echo Buds are compatible with Apple and Android devices and more affordable than Pixel Buds. Plus, with active noise cancellation and superior calling functionality, the Echo Buds have even more advantages in their corner. The Pixel Buds will work well for Android Users, especially with their Pro model, but their serious lack of support for Apple users is a problem today.

Check out the Echo Buds on Amazon.

Apple AirPods were the first of the three on the market, followed by the Pixel Buds and then the Echo Buds.

Who manufactures the Echo Buds?

The Echo Buds are made by Amazon as part of their Echo product line.

Who manufactures the Pixel Buds?

Pixel Buds are manufactured by Google in line with their Pixel phones and smart devices.

Will Pixel Buds work on an iPhone?

As of this writing, Pixel Buds are not Apple-friendly. Presently, there’s not even a Pixel App available on Apple’s App Store.

Who has cheaper products, Echo Buds or Pixel Buds?

Both Echo Buds and Pixel Buds have $100 wireless earbud options.