The PowerEdge R630 is another server from Dell, one of the world’s biggest manufacturers of servers and computer equipment. Since the first PowerEdge servers were released over twenty years ago, Dell has taken the industry by storm by constantly upgrading and releasing new models of their servers.

You’ll find servers like this powering some of the largest companies in the world, from Facebook and Google to Amazon. Data centers around the world are made up of servers just like this one. If you are in a technical position at your company, you may have been tasked with researching the best servers to upgrade to. If you need something highly configurable and expandable, the PowerEdge R630 might be ideal for you.

In today’s article, we’ll discuss the Dell PowerEdge R630 server and what makes it ideal for the most demanding businesses. Before buying a server, it’s important to do your research. So, we’re going to walk you through each component in the R630, from the processor to the storage configuration. By the end of this article, you should have everything you need to make an informed decision.

Dell PowerEdge R630: Where to Buy

Because of its age, the Dell PowerEdge R630 is more difficult to find now than in the past, and in many cases, is only available refurbished. We’ve searched the internet to hunt down the best deals on the R630 and compiled them here for you. 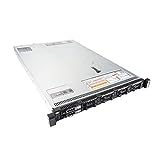 The History of Dell PowerEdge R630: What to Know

Dell has been making computers since the 1980s, but they didn’t step into the server market until about ten years later. With the growing popularity of servers and enterprise equipment, Dell took the plunge and released the 1st generation PowerEdge server in 1996. Since then, they have grown to be the largest provider of servers in the world, with a 15% market share as of 2021.

The PowerEdge R630 was launched in 2014 and was intended to be a direct upgrade to the PowerEdge R620, which came out two years earlier. The new generation is superior in every way. With a more powerful processor, faster RAM, and higher storage capacity, the Dell PowerEdge R630 is considerably upgraded from the R620.

Additionally, the PowerEdge R630 is exceptionally compact. A key component of any server is its physical dimensions. Smaller, more powerful servers are superior if you are building out a data center. You’ll typically find servers in 1U, 2U, and 4U configurations, with the number corresponding to how many “units” the server takes up in a server rack. The PowerEdge R630 is a 1U server, meaning it is remarkably compact.

Much like the older PowerEdge R620, the R630 is offered in an 8-bay or 10-bay model. There is no doubt that the 8-bay unit of the R630 is a powerful system even though it has a lower capacity, but the most significant difference is on the front panel. The fact that there are only eight bays means that you have more connections available to you, such as two USB ports, a VGA connector, and an SD card slot.

For those of you who desire a higher storage capacity, the 10-bay model of the R630 is the superior choice. Due to the fact that the drive bays are located on the front of the server, the main difference between this model and the 8-bay model is the connections located on the front panel are more limited. Compared to the 8-bay model, the 10-bay model only has an LED panel and a single USB port. Luckily, there are additional connections on the back for networking and connecting more external devices.

The PowerEdge R630 can be configured with one or two processors, like other Dell servers. The amount of processing power a single processor brings to a server increases the machine’s overall speed and computing power, so adding a second processor will effectively double the system’s performance. To take full advantage of the PowerEdge R630, you should look at a dual-CPU model using the Intel Xeon E5-2600 V4 processors.

Each Intel Xeon E5-2600 V4 processor can support up to 22 cores, or 44 threads, making this system ideal for resource-intensive tasks. With two of these CPUs installed, the Dell PowerEdge R630 is perfect for high-performance computing, virtualization, machine learning, and other common business applications.

RAM is one of the most vital aspects of a server. Fortunately, the Dell PowerEdge R630 offers superior memory performance to every model that has come previously. With 24 DIMM slots, each supporting a 64GB module, you can install up to a maximum of 1.5TB of RAM.

Unlike the previous generation, which used DDR3 RAM, the PowerEdge R630 uses DDR4 to provide lower memory latency and faster performance. Additionally, the RAM used in the R630 features “error correction” for higher fault tolerance and higher levels of reliability.

Storage is a very important aspect that you should pay special attention to when configuring a server. The storage capacity is essential if you intend to use your server to host websites, large media files, or important business files. Dell PowerEdge R630 is a powerful server that is designed with secure storage capacity in mind, allowing you to install multiple drives in a RAID array for added redundancy.

Additionally, the PowerEdge R630 is designed to provide a “hot-swappable” solution, meaning you can replace components without rebooting the system. In the event of a hard drive failure, you can remove and replace a drive quickly without suffering any downtime. The PowerEdge R630 comes with full support for SAS or SATA drives. Additionally, you can opt for NVMe solid-state drives to provide an even faster experience.

A server is powerless without an operating system and management software to monitor, update and maintain it. Luckily, the PowerEdge R630 comes with compatibility with a wide range of operating systems. Depending on your situation, you may want to install Windows Server or a variation of Linux. Red Hat Enterprise Linux and SUSE are some of the most popular server Linux distributions.

The PowerEdge R630 comes with additional monitoring tools such as the iDRAC8 Lifecycle Controller. If you have multiple servers, management software can prove efficient for deploying software and updates remotely. The R630 also features a “Quick Sync Bezel” with a built-in NFC chip. Using this technology, you can remotely connect to the server with a smartphone or tablet to check on the status.

Dell PowerEdge R630:  What was the Public Response?

As has always been the case, Dell has always faced plenty of competition, and the PowerEdge R630 is no exception. HP and IBM are well known for making quality servers, though Dell’s dominance in this industry has made them the number one choice for most businesses.

With behind-the-scenes technology like servers, no public response is often ideal. No one will take notice when a system is functioning perfectly and doing its job. That’s not to say that the R630 isn’t praised – it frequently garners five-star reviews in most online marketplaces, and most tech industry leaders have nothing but good things to say. Overall, the PowerEdge R630 maintains Dell’s reputation as a high-performance, low-fault-tolerance server designed for enterprise applications.

How old is the Dell PowerEdge R630?

What generation is a PowerEdge R630?

The R630 is in the 13th generation of PowerEdge servers from Dell.

The standard configuration weighs around 38 pounds, although this number will go up if you include the maximum number of supported hard drives.

How much RAM can a Dell PowerEdge R630 use?

The PowerEdge R630 is a 1U server, and it provides the performance you would expect in a 2U server from a few years earlier. This speaks to the incredible advancements servers have made in recent years.