One of the world’s best servers, the PowerEdge lineup power the data centers of the biggest tech and finance companies worldwide. Dell owes its meteoric rise to servers like the PowerEdge R620, which is part of the 11th generation. Over the years, Dell has innovated and improved its technology, the company has powerful servers in its ranks. Let’s dive deep into the world of PowerEdge R620, looking at its features, specs, and pricing and whether it’s worth buying.

Although Dell discontinued the R620, it is still possible to find a good deal on a new or used machine. We’ve located the best deals for the PowerEdge R620 here:

Dell started in 1984 when Michael Dell began selling prebuilt PCs. However, Dell’s servers didn’t become popular until over ten years later, when the first PowerEdge models were produced. With each new generation, Dell’s servers became even more powerful. By the time the R620 was released, the PowerEdge series was already in the 11th generation.

The Dell PowerEdge R620 was released in 2012 and was designed to upgrade to the PowerEdge R610. The R620 has faster processors, higher maximum RAM capacity, and more hard drive bays. Additionally, it offers more expansion slots and higher maximum power supply wattage. Overall, the R620 is a massive upgrade over the R610.

Servers come in multiple form factors, depending on how many units they take up in a server rack. There are 1U, 2U, and 4U models, with the number designating how large the unit is. The Dell PowerEdge R620 is remarkably compact, fitting all of its hardware into a 1U design. Additionally, the small footprint of this server means that you can fit even more of them into a small space. The space savings can add up if you build a large data center.

The Dell PowerEdge R620 was the only model of its kind. Although there aren’t different versions of the R620, different chassis configurations are available depending on your needs. The chassis is essential since it can’t be upgraded or changed after purchase. Generally speaking, the R620 is offered in two chassis configurations:

Despite having a lower capacity, the 8-bay model of the R620 is still a powerful system. The biggest difference is on the front panel. With only eight bays, you have room for more connections. The front panel houses an LCD control panel, two USB ports, a VGA connector, and a media card slot.

Dell PowerEdge servers typically offer the option to have one or two processors, depending on your needs. More demanding users can opt for a dual-CPU configuration, which uses both available CPU slots on the motherboard. If you are on a budget or don’t need the extra processing power, you can opt to install a single CPU on your server.

The PowerEdge R620 uses the Intel Xeon series of processors specifically designed for servers and enterprise applications. The Intel Xeon E5 2600 processor used in the R620 features up to 12 cores and a 30MB cache. This CPU also features up to 40 PCI lanes using three PCI-E 3.0 slots.

Additionally, you can configure the Dell PowerEdge R620 with different processors depending on your use and energy demands. For instance, the E5-2650L is a lower-wattage version of the Intel Xeon E5, using just 60 watts of energy under full load. The highest tier Xeon E5 is the E5-2690, which uses up to 130 watts.

You can also install a graphics processing unit (GPU) in the PowerEdge R620. You won’t be gaming with the R620, but you can install a reasonably powerful graphics card for running enterprise applications. The Nvidia Quadro and ATI FirePro are some of the most popular GPUs for the PowerEdge R620. Additionally, the internal graphics slot can support up to a 75-watt, 1GB GPU, with the option to use external graphics 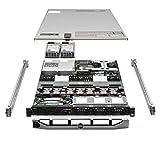 The Dell PowerEdge R620 can support a massive amount of RAM. You’ll be pleased with the R620’s generous memory configuration if you run memory-intensive applications. With 24 DIMM slots, you can install up to 768GB of RAM.

Additionally, the memory used in the PowerEdge R620 is “error-correcting,” which means it offers a higher fault tolerance and reliability. When dealing with resource-heavy applications that use a lot of RAM, the increased reliability of this RAM ensures that your applications keep running smoothly at all times.

The storage configuration is vital when buying a server. The Dell PowerEdge R620 offers multiple configurations depending on the type of drives you want to use and the capacity you need.

The drive bays located on the front of the server are entirely hot-swappable. You can remove, replace, and upgrade a hard drive without rebooting the system. When you are running an enterprise application, downtime can be costly. The ability to swap out hard drives on the fly means you don’t have to worry about downtime.

A server is powerless without an operating system. Once you have the hardware configuration that works for you, setting up the software is your next step. The PowerEdge R620 makes it easy to deploy, monitor, and update your server with built-in management software. Dell “Open Manage” can provide full remote control of your server, no matter how many units you have.

Additionally, depending on your tastes, you can choose from a wide range of supported operating systems. The R620 is compatible with multiple versions of Linux, including SUSE and Red Hat Enterprise Linux. You also get support for Windows Server 2003 and newer. The operating system can be installed locally from a USB flash drive or remotely via PXE boot.

The Dell PowerEdge R620 was a massive success and is still used worldwide in data centers and labs. With a market share of over 15% as of 2021, Dell is the largest provider of servers worldwide. Despite this, competition is still very strong. HP and IBM both make servers and enterprise equipment to compete with Dell.

You want a cheap, basic server. Although the PowerEdge R620 is ten years old, it is still a powerful piece of equipment with many potential use cases. If you are comparing prices of the latest PowerEdge servers, you will find older models like the R620 substantially cheaper. Additionally, with a host of modern features, the R620 will likely still be used another ten years later.

You need a state-of-the-art server that uses the latest technology. The PowerEdge R620 is an older model, so it has some limitations. If you’re planning to host demanding and resource-intensive applications, the R620 will struggle.

How old is the Dell PowerEdge R620?

What generation is a PowerEdge R620?

The R620 is among the11th generation in the PowerEdge series.

Dell has been in the server business for decades. Currently, they are the largest provider of servers in the world. Furthermore, the industry has nothing but praise for Dell PowerEdge servers.

Is the Dell PowerEdge R620 fast?

With a dual-CPU configuration and up to 12 cores per processor, the R620 is extremely fast.

The Dell PowerEdge R620 can support a maximum of 768GB of RAM.