Dell PowerEdge R610: Where to Buy

Dell has held a 15% market share for all servers sold worldwide, thanks to successful products like the PowerEdge R610. It might be difficult to find the R610 in physical retailers due to its age and proprietary design. Your safest bet is to shop online. Amazon and other leading stores have deals on refurbished or new products. 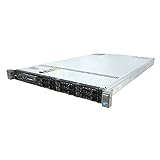 The History of Dell PowerEdge R610:  What to know

The PowerEdge R610 was released in 2009 and was an upgrade over the PowerEdge R300, which was released a year earlier. The new model had a higher maximum RAM capacity and upgraded chipset and processor support.

Servers are usually measured by their form factor. R610 is available in three form factors: 1U, 2U, and 4U. The number represents how many “units” the server occupies in a server rack. The Dell PowerEdge R610 is a 1U server, so it only takes up one unit. Additionally, there are larger servers available from Dell, but the R610 is designed for compact use cases.

The Dell PowerEdge R610 was available in a few different configurations, although they were all the same model. Depending on your specific needs, you could buy the R610 from the factory with your choice of processor.

If you need more power than the dual-core version offers but don’t want to stomach the cost of the 6-core model, then the quad-core model is for you. This PowerEdge R610 is loaded with a powerful Intel Xeon 5600 processor, great for demanding workloads.

The ultimate Dell PowerEdge R610 is the 6-core model with a powerful Xeon 5600 processor. It’s ideal for more intensive workloads. The only downside to this version is the price.

Like other servers in Dell’s lineup, PowerEdge R610 allows you to install one or two processors. Each processor increases the overall computational abilities of the server. If you need to run more demanding applications, get a second processor.

You can increase your processing capabilities by stacking multiple servers together, as these systems are designed to do. However, a dual-CPU unit will give you much more processing power than a standard desktop.

With twelve DIMM slots, the PowerEdge R610 could support an incredible 192GB memory. Running at a maximum frequency of 1333MHz, you could configure your RAM to run in single or dual-channel mode.

Most Dell PowerEdge R610 systems originally shipped with between 24GB to 48GB of RAM. Luckily, you could upgrade later, thanks to the inexpensive memory. Additionally, with the “error-correcting” nature of the Dell R610’s memory, your system would have a much higher fault tolerance.

One area you should give particular attention to when configuring a server is storage. If you are setting up a file server or using your server to host websites or media files, having a lot of storage is vital. The Dell PowerEdge R610 is designed with a secure storage capacity in mind.

With six 2.5” hot-swappable drive bays, you can install up to 12TB of total storage in the R610. Additionally, thanks to the versatile design, you can use either SAS or SATA hard drives or solid-state drives.

Once you have configured your hardware, the next step is to install your software. The Dell PowerEdge R610 makes it easy to load your favorite operating system. With built-in USB ports, you can load an operating system from your boot media or load the software over your network.

Dell also includes embedded management software for remotely deploying and managing your server. Additionally, the embedded controller makes it easy to configure other settings of your system’s hardware, similar to a “BIOS” system on a standard desktop.

Like any other computer, you can install Windows Server, Ubuntu, or Red Hat Linux, depending on what you plan to use your server for.

Dell PowerEdge R610:  What was the Public Response?

Dell has always had plenty of competition, and the PowerEdge R610 was no different. IBM and HP have been making servers for decades, but they never got to Dell’s level of success. Overall, the Dell PowerEdge has won the title of best server, and that’s why it’s widely used in data centers and businesses worldwide

Additionally, Dell has received recognition for the reliability of its servers from testimonials and press releases. The Dell PowerEdge R610 is a great example of a server that has stood the test of time. Although it may be a little old for mainstream use today, there is no doubting the long-lasting quality of these servers.

Check out the Dell PowerEdge R610 on Amazon.

How old is the Dell PowerEdge R610?

What generation is a PowerEdge R610?

The R610 is part of the11th generation of PowerEdge servers from Dell.

How much power does a Dell PowerEdge R610 use?

Dell has been making servers for many years, and with a reputation for building quality hardware, they have taken over the market and now sell more servers than any other company.

When fully loaded, the Dell PowerEdge R610 weighs in at 40 pounds.