The Complete Guide To Virtual Reality 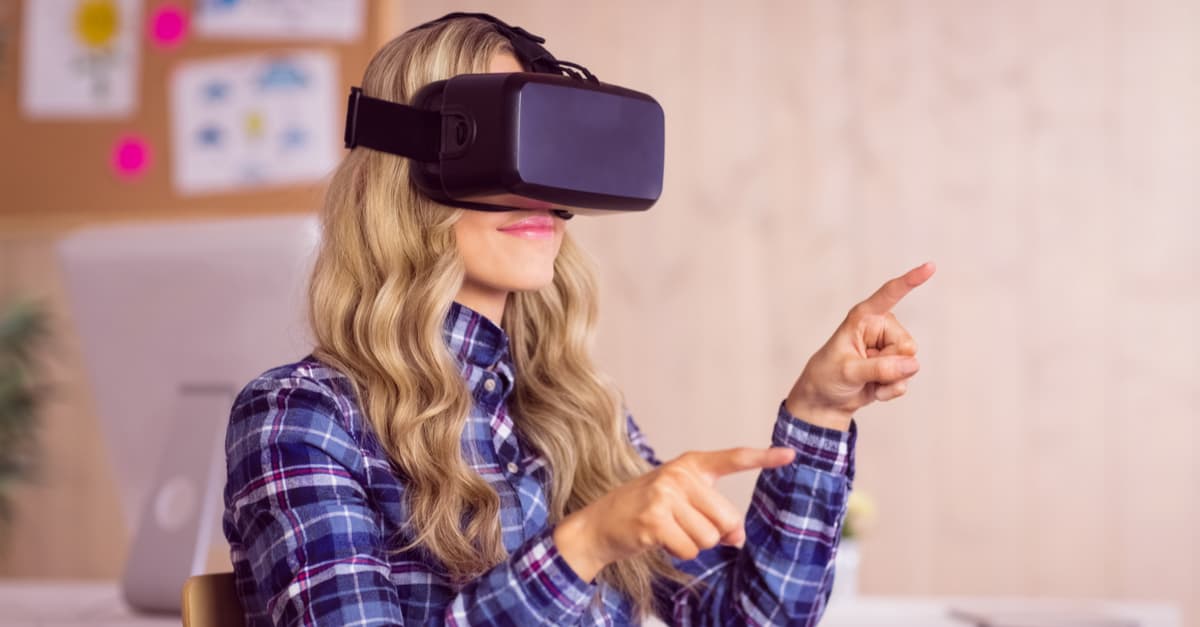 What is Virtual Reality: Complete Explanation

Virtual Reality is a type of technology that is designed to simulate reality, or at least give the user an alternative experience of reality. It has involved considerable since its first exhibition in the 1950s and gotten more and more immersive, allowing users to truly lose themselves in a simulated world.

The goal of VR is to simulate reality as much as possible. Users will put on a headset, glasses, and some type of handheld controller. The technology continues to improve in this area, but truly immersive VR makes the technology as unobtrusive as possible. At the moment, headsets exist that allow a field of vision to move when the user turns their head. Furthermore, controllers are getting more advanced and less obtrusive, allowing users to have subtle movements they make reflected in their VR world.

Virtual reality started for games and has had a slew of entertainment applications. However, games are not the only use of VR. Training, exercises, videos and more have emerged as popular methods of virtual reality consumption.

The exact definition if virtual reality has changed significantly over time. At the moment, the closest thing to a formal definition of VR is the creation of the world that is meant to immerse the user. It is an interactive, three-dimensional world that the user can interact with using sensory technology.

How does Virtual Reality Work?

Technology is a critical component of any VR experience.

VR programming is different than other forms of computer programming. Given the array of inputs and outputs used in VR, the system needed its own programming language. That was developed in 1994, when VRML, or the Virtual Reality Modeling Language, was first introduced.

All forms of virtual reality use some sort of immersive headset and glasses. This equipment is arguably the most important part of any virtual reality hookup, as it is necessary to provide a full immersive experience.

The past decade has also seen a significant advancement of this form of technology. Headsets are now available that will allow users to have their movements tracked as they turn their head, providing a full 360 degree field of vision. Headsets can produce full surround sound, and glasses will project two images that are necessary in order to create the full field of vision for users.

Controllers are necessary in order for the user to make real inputs into the virtual world. These controllers vary in shape and size, but generally allow users to control their virtual “hands” and have buttons that allow for the input of certain actions, like grabbing objects.

Depending on the system in question, other haptics are available that can further enhance the fully immersive experience. These haptics can include “weapons,” gloves, leg components, or more. If designed properly, these haptics will give users feedback about what is happening in the virtual world.

Where did Virtual Reality originate from?

Concepts for VR first began to appear in the 1860s, when individuals like Antonin Artaud began to argue that certain situations – like stages and acting – could be assumed to be reality and that individuals watching and participating in such plays should regard the stage as reality.

However, the term “virtual reality” first appeared in science fiction movies. The first VR machine, the Sensorama, was invented in the 1950s by Morton Heilig. Though rudimentary by today’s standards, Heilig’s invention showed the potential entertainment and experiential applications of virtual reality.

How Do You Create Virtual Reality?

Creating Virtual Reality is not something that the average person can do. It requires extensive computer programming knowledge and an understanding about a variety of conceptual topics, including what kind of virtual reality program you are trying to make and what system you want to program for.

What Are the Applications of Virtual Reality?

Gaming for virtual reality is relatively simple and not much different than other computer games. There are a variety of VR gaming systems currently available, including extensions for PlayStation and Xbox. There is also the Oculus Quest, Valve Index VR Kit, HTC Vive Pro, and more.

It is also worth noting that the business model for all of these immerse virtual reality technologies has continued to increase over time, with the stocks of most companies involved continuing to rise. This speaks well to the financial potential of this industry in the long-term, and analysts project that the stocks of these companies is expected to continue to rise.

The challenge for these entertainment systems in 2021-2021 has been shortages, with stocks of these systems being low and chip shortages resulting in issues for consumers who are attempting to purchase these systems. However, the past few years have seen a dramatic rise in virtual reality cafes and arcades. These arcades – which usually sell access to VR headsets and glasses on a timed basis – allow users to experience VR gaming and videos. However, these arcades face the same challenges that video game arcades faced in the 1990s: As the technology becomes more popular and less expensive, it is more accessible to the average consumer, meaning that people will not have to turn towards expensive arcades to use the equipment they are seeking.

In more advanced or technologically-adept industries – such as construction or medicine – training videos are rapidly giving way to virtual reality trailing. The technology now exists to allow for certain companies to program immersive training simulators for a variety of fields. These training programs may incorporate a variety of equipment uses and enable individuals to simulate certain environments, providing for a more intense, immersive experience.

Virtual reality training is currently available in more than just literal skills training, as many programs have emerged that give candidates the chance to practice soft skills like leadership and interpersonal relationship development.

The rise in popularity of programs like the Peloton have shown that there is a market for digitally-connected exercise options. While it is not quite ready for mainstream use yet, there is a rising market for virtual reality exercise. Already, there are some programs that integrate digital screens and interactive coaches with a person’s exercise. The experience is not yet quite as immersive as regular VR, and the glasses and headsets necessary to truly experience VR are quite bulky and thus limit the potential of virtual reality exercise. However, it seems very likely that technological advances will help to make the idea of virtual reality exercise more and more possible.

Examples of Virtual Reality In the Real World

There are many examples of virtual reality in the real world. These examples include:

The Oculus Quest 2 – owned by Facebook – is a virtual reality system that hooks directly into your computer. You can use it for gaming, training, and to watch videos.

The Valve Index – produced by internet gaming giant Valve – is one of the most expensive commercial headsets on the market today, costing customers around $999. However, purchasing the Index also involves purchasing all other necessary equipment, including glasses, headphones, and controllers. The controllers are billed as “revolutionary” in that they track finger movements, and the system is also one of the fastest and smoothest working currently available on the market.

What exactly is virtual reality?

Virtual reality is meant to provide users with an immersive, three-dimensional experience, one in which they will be fully absorbed in a technological world. Users will be able to interact with that world based on their physical movements, including via the use of a headset, glasses, controller, and more.

What are good examples of virtual reality?

There are many good examples of virtual reality. Immersive games, such as Skyrim VR or Half-Life: Alyx are excellent examples. These games can be played on almost any VR system.

What can you do with virtual reality?

There are an extensive array of potential virtual reality uses, including entertainment (video games and videos), training, education, and exercise. The technology behind virtual reality also continues to advance, meaning that the applications for this field will do the same.

How does virtual reality work?

Virtual reality works via the use of physical equipment and a special programming language. In virtual reality, users don a set of equipment. While this equipment varies from user to user, all virtual reality equipment takes advantage of headsets, glasses, and controllers. Users can then interact with their virtual environment.

When was virtual reality invented?

The first actual, physical exhibition of virtual reality was developed in 1957. Although the concept was invented earlier than that, the Sensorama, invented by Morton Heilig, was one of the first demonstrations of the concept of virtual reality. The device incorporated a wide array of tools designed to immerse an individual in virtual reality. These included a chair, computer monitor, odor-emitters, a fan, and more. These were all relatively rudimentary, and no one could realistically be convinced that they were actually in an altered form of reality. However, the Sensorama did portray the first ever effort at virtual reality, and it showed the potential that this medium had to offer.