The History of Cryptography

Cryptography is the method in which communications can be made in a secure, secretive way. It is an art that dates back […] 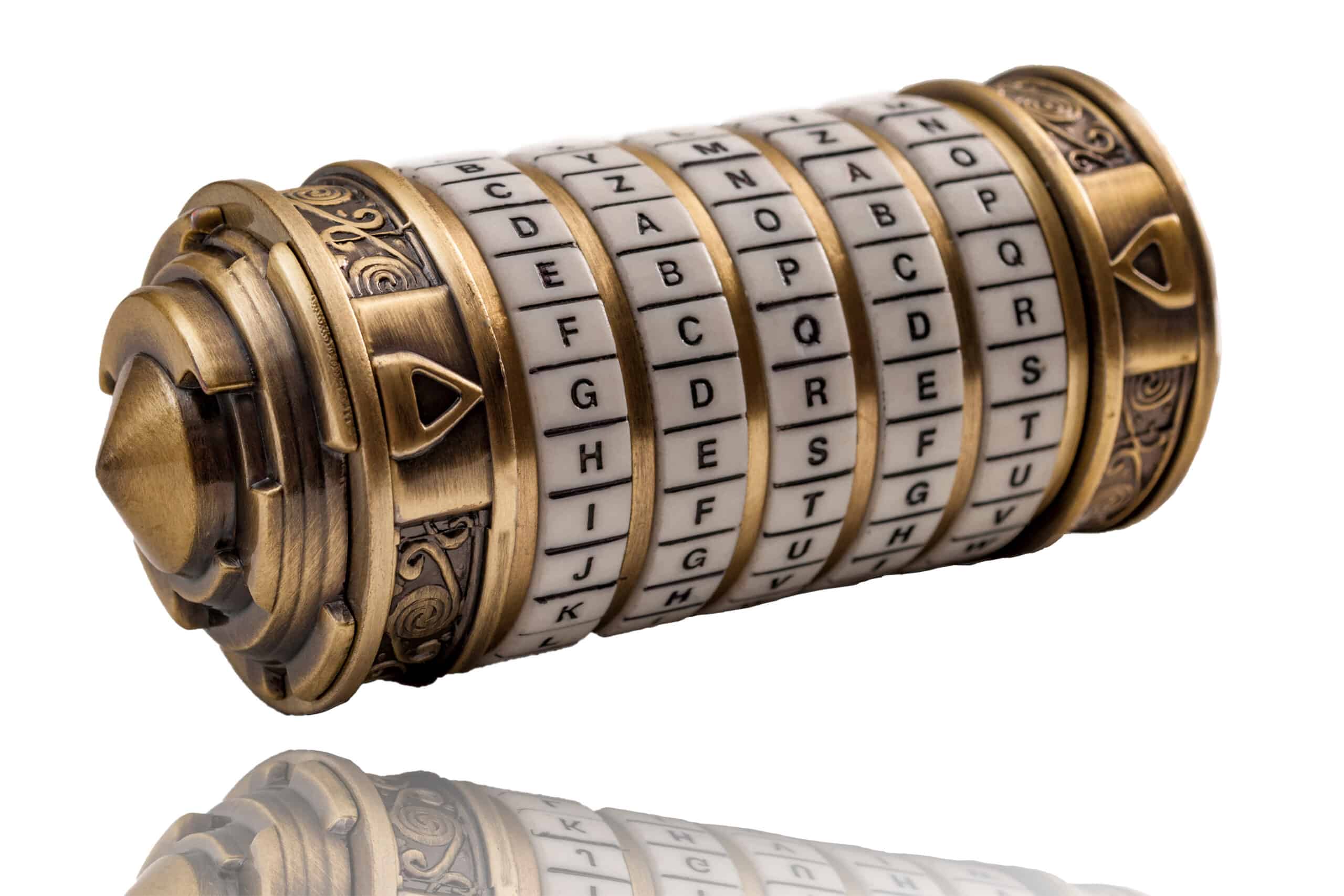 Home » Concepts » The History of Cryptography
Published on September 19, 2021

Cryptography is the method in which communications can be made in a secure, secretive way. It is an art that dates back military and has often been used in military or business applications. Until the 20th century, it involved written communications only, with communication occurring on written paper. As communication methods evolved, the art changed as well, evolving into audio and electronic forms of communication.

Cryptography would typically involve communication that would appear unintelligible to the naked eye, such as a string of seemingly random letters or numbers that could not be understood with a normal look. However, the code could be cracked via the use of a cipher. A cipher is defined as an algorithm – or code – that can be used to encrypt and then decrypt a code. This cipher could be used to turn a coded communication into some sort of understandable text, and this formed the core of cryptography.

Of course, if cryptography is needed, then that means that someone is trying to break the code and gain access to secretive communications. History is replete with examples of opposing military forces using cryptography to crack the communication of an opposing army or empire in an effort to gain access to their communications. Perhaps the most famous example is during World War II when American codebreakers were able to crack the Nazi’s “Enigma” cipher. This information was used to pass military intelligence to allies until the outbreak of World War II in 1941 when the United States military began to use the information more directly. This effort was eventually expanded to the Japanese empire.

Changing methods of communication and technology have resulted in expanded efforts to encrypt and decrypt communications and digital assets.  Today, cryptography applies to electronic communication in the form of encrypting information as binary bit sequences. Computer algorithms are utilized in order to code data, with secure programs held by the receiver being utilized to decrypt and use the data. While cryptanalysis can be used to break these codes, cryptanalysis is not foolproof, and modern cryptography is often extremely difficult to crack.

The formation of cryptography: Where it all began

Cryptography dates back to at least 1900 BC: A series of more ornate hieroglyphics were found in the tomb of Khnumhotep II. These hieroglyphics implied that there was additional meaning to the symbols that would not be understood without an advanced understanding of the language, thus marking the first recorded use of cryptography.

The first military application of cryptography was discovered in 100 BC when Julius Ceasar used the first substitution cipher. Messages would be sent to military generals and commanders in scrambled letters. These military leaders, who possessed the key, would substitute one letter for another, allowing for the message to be decoded and understood. This also gave rise to the first efforts of decryption, which are relatively easy with straight substitution ciphers, as the code can be broken based on the frequency of letter use.

More advanced keys began to develop in the 16th century when encryption keys began to be used by adding letters to keys that were actually embedded within the message. Possession of an original cipher was still required, but these techniques made messages much more secure.

How cryptography works: The mechanics

In ancient times, cryptography would work relatively simply. A coded message would be sent, often between an Emperor and his or her military leaders. This message would appear as scrambled numbers or letters that would make absolutely no sense to anyone who happened to intercept the communication. However, at the other end of the communication, the recipient would have the cipher that could be used to decipher the communication.

For example: Information would be sent in which each letter would be three letters away from the actual text. Applying this cipher would allow for the message to be decoded. This is a relatively simple version: More advanced ciphers would change based on the letter written and may involve extensive use of data.

As modern means of communications evolved, so did the ciphers that were used. Electronic and audio communications would send messages in code and require that individuals receiving those messages have the appropriate changing ciphers to decode the message.

What is an example of cryptography?

Perhaps the most famous example of cryptography occurred during World War 2, when the Nazi Empire used the enigma machine in order to prevent the Allies from cracking their secure communication. However, unbeknownst to them, the Allies had done so, providing them with a major advantage during the war.

The Enigma Machine was used by the German military and naval forces, starting in the 1920s. For the time, it was an extremely advanced piece of military hardware. Coded messages would be sent through the machine, in which messages would be entered on a keyboard while another display lit certain letters, creating the cipher. An individual would have to then enter that cipher in order to crack the code and read the text. Of course, the settings on the device were altered repeatedly – sometimes on a daily basis – and the person on the other end of the coded message would have to possess the appropriate settings in order for the message to be decoded. As such, these messages were thought to be very secure and difficult to crack.

Furthermore, for its time, the Enigma was an extremely advanced piece of electronic hardware. It used many groundbreaking pieces of hardware, including electronics, circuitry, rotors and more to create an advanced system of codes that was thought to be unbreakable by the Nazi empire.

However, that wasn’t the case at all. The Enigma was first cracked by Poland in 1932 when Marian Rejewski – a cryptanalysis for Poland – was able to decipher the device’s code. Poland passed the information along to the allies as long as they could, and English forces eventually evacuated the various code-breakers after the outbreak of World War 2.

What is used for cryptography?

The components that are used for cryptography depend on the method of cryptography used. Most cryptography today utilizes electronic communication and computers, with quantum computing often becoming involved for more advanced forms of cryptography. These devices used advanced mathematical algorithms in order to code and decode data, with secret keys – or secret ciphers – being used in order to decode data from a hash form. The most common form of cryptography today uses hashes that can code data and make it impossible to read without someone having the appropriate cipher on a computer. Hashes will scramble data into a seemingly random string of numbers, letters, and symbols, making it impossible to read unless someone at the other end has the appropriate cipher.

What is cryptography in security?

The most common types of cryptographic usage – at least until the 20th century – were using code to pass along orders regarding troop movement and other military activity. In these areas, secrecy is obviously paramount, and orders coming in from a central location would coordinate military movement in order to win some sort of military battle.

What are the three types of cryptography?

In modern times, there are roughly three types of cryptography.

The first is Secret Key Cryptography. This is the easiest form of cryptography to use, but can also be the easiest to crack. It is relatively simple: Individuals on both end of a secure communication have the same key. That key is used as the cipher, and data is encrypted and decrypted along these lines. The key changes with each use but is possessed on both ends of the communication.

The key will typically scramble the worlds into an unreadable form. This way, even if the secure message was accessed, it would appear completely scrambled. Upon receipt, the individual at the other end of the communication would decode the communication and enable it to be read.

Secret Key Cryptology was used in ancient times as well, making it the oldest form of cryptology.

One of the advantages of this type of communication is that messages can be sent by anyone who possesses the Public Key. However, they can only be decoded by individuals who possess the private key.

One of the more popular forms of Public Key cryptography involves the use of the elliptic curve. The elliptic curve utilizes algebraic codes in order to enhance the security of a Public Key. This form of cryptography is relatively new and has only been in operation since 1985. It is also a primary example of the importance of algebraic sequencing in developing secure codes.

The final form of cryptographic communication is Hash Functions, which is the most secure form of cryptography available. In a hash function, data is turned into a string of messages that is a fixed-length string. The hashing is randomized, meaning that the cipher essentially changes for each piece of data sent, and only by possessing the cipher can you crack the code on the other end. The data is also turned into a fixed size, meaning that someone cannot simply apply a random cipher in order to crack the code.