Home » Companies » The History of Yahoo 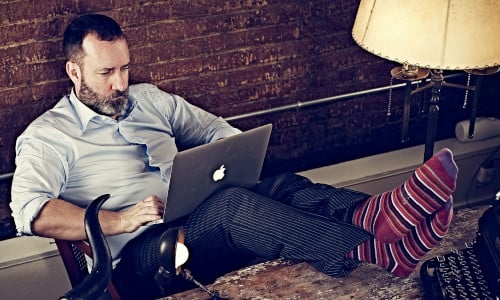 The Internet of Things of Kevin Ashton

In 1997, the newly appointed P&G cosmetics brand manager with a bachelor’s degree in Scandinavian studies Kevin Ashton (born 1968) noticed that every time he checked the shelves of various British retailers for Oil of Olay Hazelnut lipstick, they were empty. Hopping mad, Ashton sought a technical fix and came across RFID tags, to be put on every product. At that time they were way too expensive, but Ashton knew the tags could be manufactured at a fraction of current cost, especially if, say, P&G were to order them in huge volume. He started giving his RFID presentation to anyone who would listen, and they kept passing him up the chain 🙂

A year later Ashton was sent to MIT as the executive director of the Auto-ID Center, an research group in the field of networked RFID and emerging sensing technologies. Ashton and his team predicted that RFID would usher in a new age of business-process clarity and corporate profitability (when the cost falls from 10 to 5 cents a tag). The reams of data would also give sellers new insight into consumer behavior, more control over pricing, and better-targeted in-store promotions.

In 1999 Ashton, invented the term "The Internet of Things" to describe a system where the Internet is connected to the physical world via ubiquitous sensors.

Ashton’s original definition was:
Today computers—and, therefore, the Internet—are almost wholly dependent on human beings for information. Nearly all of the roughly 50 petabytes of data available on the Internet were first captured and created by human beings—by typing, pressing a record button, taking a digital picture or scanning a bar code. Conventional diagrams of the Internet… leave out the most numerous and important routers of all people. The problem is, people have limited time, attention and accuracy—all of which means they are not very good at capturing data about things in the real world. And that’s a big deal. We’re physical, and so is our environment… You can’t eat bits, burn them to stay warm or put them in your gas tank. Ideas and information are important, but things matter much more. Yet today’s information technology is so dependent on data originated by people that our computers know more about ideas than things. If we had computers that knew everything there was to know about things—using data they gathered without any help from us—we would be able to track and count everything, and greatly reduce waste, loss and cost. We would know when things needed replacing, repairing or recalling, and whether they were fresh or past their best. The Internet of Things has the potential to change the world, just as the Internet did. Maybe even more so

Ashton imagined a world of interconnected, sensor-laden devices and objects, and predicted that home sensors will one day inform choices in all aspects of our lives:
We’re consuming so many things without thinking about them—energy, plastic, paper, calories. I can envision a ubiquitous sensor network, a platform for real-time feedback that will enhance the comfort, security, and control of our lives.

The Macintosh, or Mac, is a series of several lines of personal computers, manufactured by Apple Inc. The first Macintosh was introduced on January 24, 1984, by Steve Jobs and it was the first commercially successful personal computer to feature two … END_OF_DOCUMENT_TOKEN_TO_BE_REPLACED