Gaming was a stationary activity until the GameBoy arrived to shake things up. Sony was late to the portable party until 2004 when the PSP arrived. They brought more than 1,000 titles to the masses in a short time, including shooters. The best PlayStation portable first-person shooters were few and far between, but we’ve compiled a list of the top titles that are still a blast on the PSP.

The PlayStation Portable was more capable than most, considering the wealth of titles that made their way from consoles to their portable. However, some titles were only released digitally, leaving the overall selection of FPS games on the PSP slim. With less than a dozen titles to choose from, here are the absolute best PlayStation portable first-person shooters.

When you think of first-person shooters, Konami usually isn’t the first name to come to mind. While the company hasn’t produced many games from this genre, in 2005, they released one of the better FPS games for the PSP with Coded Arms.

Many FPS games drop you into historical battlefields or settings, but that isn’t the case with Coded Arms. Instead, you play as a hacker inside a VR military simulation, traversing randomly generated levels in sectors. Enemies range from artificially enhanced soldiers and Quicksilver bots to swarms of murderous bio bugs.

The setting of Coded Arms is unique, but so are the equipment and power-ups. They are named with file extensions which adds a nice touch to this hacking-based shooter. As one of the first FPS games to arrive on the PSP, the controls could use a little work, but the action is intense. When combined with the gameplay and graphics, Coded Arms is easily one of the best PlayStation portable first person shooters of all time.

Coded Arms received mixed reviews due to the controls and short story. However, since then, the game has become a classic on the platform and is regarded as one of the top shooters to hit the PSP handheld. Coded Arms: Contagion is a sequel that lets you continue the action on your handheld if you enjoy the first game.

Check out the Coded Arms on Amazon.

Part of a long-running game franchise, Tom Clancy’s Rainbow Six: Vegasis a must-have game if you own a PSP.

Video games based on Tom Clancy’s books have been going strong since the Hunt for Red October dropped on the C64 and Amiga back in 1987. If you’ve played other games in the Rainbow Six series, you’ll be familiar with the gameplay in Rainbow Six Vegas. Vegas introduced a few new features, including a third-person system for shooting around the corner. The gameplay is tight on the PSP, but Las Vegas is the show’s real star. To say the world is “immersive” would be an understatement.

Each single-player campaign has five missions, where you alternate between playing as Brain and Shawn. Multiplayer has two game modes: Survival and Team Survival. There are six maps and around 15 weapons in Rainbow Six: Vegas, excluding gadgets, gizmos and grenades.

This game had a lukewarm response on the PSP compared to the console’s counterpart considering the PlayStation portable doesn’t have the same power as a console. A few features, like the health regeneration system, are missing from the PSP port, although it’s still one of the better titles from Tom Clancy to hit the PSP.

Check out the on Tom Clancy’s Rainbow Six: Vegas Amazon.

Medal of Honor: Heroes is a beloved franchise with fans of first person shooters and historical games.

The ninth in the series, Medal of Honor: Heroes arrived in 2006, and the PlayStation Portable is the only system where you can play this fantastic FPS game.

The setting of Medal of Honor Heroes varies compared to other games in the series, but you’ll encounter some familiar faces, including Manon and Patterson. You get to step into the boots of some characters from the franchise as you battle through Belgium, Italy, and the Netherlands. The single-player missions are pretty straightforward with the objectives, but multiplayer takes things to another level.

Online multiplayer for Medal of Honor Heroes allow 32 players per match and features a slew of authentic armaments. There are also six game modes, including favorites like Deathmatch, Hold the Line, and Dominations. The leaderboards are no longer active, but there are still plenty of achievements and medals to shoot for.

Heroes is unique as it received favorable reviews on the handheld but was never ported to other PlayStation systems or released digitally. It’s a great game to pick up and play when you’re on the go, and one of the more polished first-person shooters ever produced for the PlayStation Portable handheld.

Check out Medal of Honor Heroes on Amazon.

Cabela’s Dangerous Hunts Ultimate Challenge for the PSP is a fantastic choice if you’re tired of warfare and want to do a bit of hunting.

Some FPS games allow users to switch to a third-person view, Cabela’s gameplay and structure remain the same. While a true first-person shooter, there are no enemies to battle in Dangerous Hunts Ultimate Challenge in a traditional sense. The storyline involves a hunter, and your prey is just as dangerous as the title implies. Depending on the stage, you’ll need to bait grizzly bears and fight lions with bows and arrows. The game occurs across several continents, including Australia, Siberia, Africa, and Alaska.

The animals in Cabela’s Dangerous Hunts are just as varied as the weapons used to take them down in the wilderness. There are wild boars, bush elephants, crocodiles, and even cobras. It’s not your average hunting game, and there are well over a dozen missions to sink your teeth into on the PlayStation Portable.

Mobile gamers have enjoyed touchscreen titles like Deer Hunter for years, but this FPS game was rare on older handhelds. It’s the type of shooter anyone can play, and while there are no bad guys, there is plenty of danger in Cabela’s Dangerous Hunts Ultimate Challenge.

Check out the on Amazon. 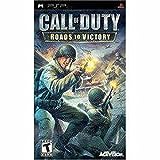 For the PSP, the best shooter in the franchise is Call of Duty: Roads to Victory, a spin-off of the console version of Call of Duty 3.

The Call of Duty series has kept gamers engaged since 2003, when the original dropped players into World War II. That setting remained a staple of the series for years and even made its way to handhelds.

Call of Duty: Roads to Victory has something for everyone, provided you want action throughout World War II. You can fight as the Canadians during Operation Infatuate or the Americans through Operation Market Garden, Detroit, and Avalanche. There are three campaigns, including the British, with 14 missions overall.

Like all the best first-person shooters, Roads to Victory has a stout multiplayer mode. You can fight with up to six friends through Ad Hoc mode on various maps. Modes include Deathmatch, Team Deathmatch, Capture the Flag, Hold the Flag, and King of the Hill. Reviews on this game were above average, and it’s the only COD title available on the PSP.

COD: Roads to Victory didn’t have the tight gameplay of Coded Arms, but the presentation is excellent, and multiplayer is a blast if you have friends to play with. The only other game in the series available on a handheld from Sony is Call of Duty: Black Ops Declassified, released on the PlayStation Vita.

Check out the Call of Duty: Roads to Victory on Amazon.

Can you play Fortnite on a PSP?

While you can port and play many games on these systems, the PSP isn’t powerful enough to handle Fortnite.

Yes, you can find old stock of PSP games that are brand new and undamaged through Amazon and other retailers.

Can you still play PSP games with multiplayer features?

With Ad Hock and software like XLink Kai, you can still enjoy the multiplayer features of many PSP first-person shooters.

When did they stop making PSP games?

Developers stopped around 2014 when Sony discontinued production on the PlayStation Portable.

Yes, as the Vita has a touchscreen display, better hardware, and almost as many games as you’ll find on the PSP but with newer titles.

There is no app, but you can load and download YouTube videos from the web browser on the PlayStation Portable.