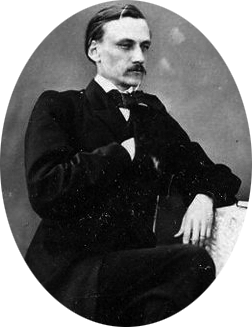 The Swedish engineer Axel Jacob Petersson (see the biography of Axel Jacob Petersson), was a universal inventor and is famous for several books and articles, and the construction of railways and viaducts, including the famous railway bridge Järnvägsbron i Minnesund (launched in 1879 and still in use!), steam engines, a rotating camera for photography, military equipment like a bayonet and a repeating rifle (Krag–Petersson rifle) and other devices, between them two very interesting calculating machines.

Mr. Petersson was born in Oland in 1834. He studied school in Stockholm at the Royal Institute of Technology and graduated in 1855. His first job was at the canal administration before he moved to Norway to become the assistant engineer for a big project in 1859. Many of his projects involved building viaducts and bridge systems, including the Kongsvinger Line, Ostfold Line, and Dovre Line.

Peterson was not healthy and often fell ill and was in poor health. He retired early (1881) due to illness and died at the young age of 50 years old in 1884.

Axel Jacob Petersson: What Did He Invent?

The first of the machines (called Calculator) was presented in 1873 at the Weltausstellung 1873 Wien (World Exposition 1873 Vienna), while the second was presented in 1876 at the 1876 USA Centennial Exposition in Philadelphia. In several sources is mentioned also a pin-wheel calculating machine, presented in 1866 by one C. Petersson at the Stockholmsutställningen 1866 (Stockholm Art and Industrial Exhibition), but nothing is known about this device, and if it was made by Axel Petersson.

The official report of the United States Centennial Exposition Commission is mentioned:
The most important exhibits of this class [Mechanical Calculation] were the two calculating machines of Mr. George B. Grant, of Cambridge, Massachusetts, the larger one of which is arranged to combine and print functions involving 100 elements. The combination of the several parts is extremely simple; the number of elements can be indefinitely increased, and the machine acts with the greatest certainty. The smaller machine, or arithmometer, is an adding machine, which successfully rivals the well-known one of Colmar. The adding machine of Petersson, of Norway, also deserves special mention here

It is unknown how many machines had been manufactured by Petersson, but to the present time survived four of the machines, three in Norwegian museums, and one—in the Tekniska museet, Stockholm (see the lower photo). 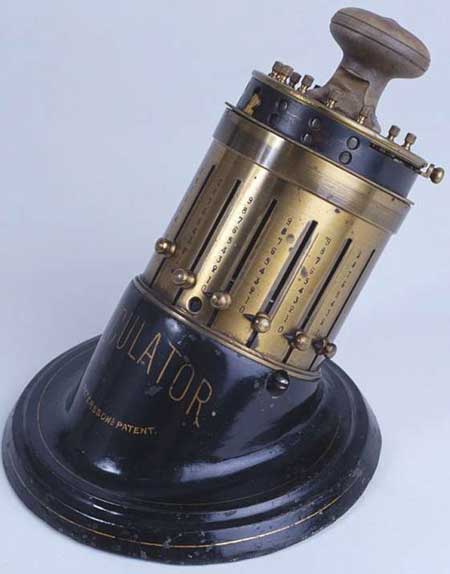 Calculator of Axel Jacob Petersson: How Did it Work?

The construction of the machine is based on the stepped drum of Leibniz, mounted in the center of the machine, which can be rotated by a crank. The box is of cylindrical form with a diameter of 9.5 cm and height of 20 cm and is made of cast iron, copper alloy (brass, copper, and bronze), and wood. The weight is 6.6 kg.

The input mechanism consisted of sliders (5 or 6 in different variants), and the output mechanism consisted of dials (12 or 14 in different variants). In the variant with 14 dials, the tens carry is self-contained and allows “endless” calculation. The mechanism was unidirectional and subtraction was done by using complement to 10. The machine has also a revolution counter, which is necessary to be used during multiplication and division.

The whole mechanism of Petersson’s Calculator seems to be simple, but very reliable and easy for manufacturing, and as a whole, it is clear that Axel Jacob Peterson was a remarkable constructor.