Thermal grease, thermal paste, heat paste, even thermal ‘goop’ to some; essentially, they’re all the same thing, but what is thermal grease used for? Simply put, thermal grease (such as the new Arctic MX-6) is placed between either your CPU or GPU and the heatsink to allow for better heat transfer.

This helps reduce operating temperatures and improve the performance and longevity of the system. If you’re into gaming and looking to purchase a high-end processor, using thermal grease is mandatory.

Unsurprisingly, using the best quality thermal grease will last longer than a cheap alternative. With that said, let’s look at the MX-6 thermal grease, the new offering from Arctic. 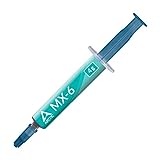 Images of the new thermal grease were also revealed by an American tech leaker, seeming to indicate the same. Sure enough, Arctic preliminarily listed MX-6 thermal grease on Amazon Germany on September 22, and the product is now available elsewhere as well.

Additionally, AMD and Intel are set to release their next line of processors with increased power: the Ryzen 7000- series ‘Raphael’ and 13th Generation Core ‘Raptor Lake’ processors. 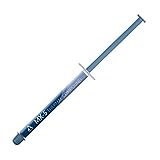 Many users experienced a flawed batch of MX-5 this year, Arctic’s popular previous offering. These affected batches deviated in consistency and durability, resulting in premature hardening of the grease.

Arctic has offered these customers a replacement in return for proof of purchase, which they’ll definitely be pleased with. Even though many were happy with using MX-5, Arctic has chosen to discontinue this range only 1 and a half years after its launch in 2021. 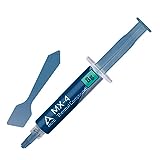 It’s notable that while Arctic is intending to replace the MX-5 with MX-6 completely, they did not do the same with their MX-4 products. They are still available, even though MX-5 generally delivers better performance.

Stats on MX-6 are currently unknown, but it’s promising that performance will be superior again this time round, and maybe the grease will be better suited to the new CPUs on the horizon.

How Does Thermal Grease Work?

Since heatsinks never have completely flat surfaces, direct contact with the CPU would create micro pockets of air, which insulate some of the heat produced. To improve the heat transfer to the heatsink, thermal grease is used to smooth out the unevenness of this surface and increase thermal conductivity.

Now that we know the benefits of using thermal grease, it would be appropriate to discuss exactly how to apply this to your system.

Applying Thermal Grease to Your CPU

First and foremost, you’ll need to make sure your CPU is clean, without any old thermal grease on it. If there is, this will likely be hardened, so it will need to be removed with a cloth and isopropyl alcohol.

After removing the old grease, a small amount of the new grease can be applied onto the integrated heat spreader (about the size of a pea or a grain of rice). Next, use light pressure to press the baseplate of the cooler onto the CPU, and attach the cooler to the mount without releasing the pressure.

You need to apply enough pressure to prevent the cooler from moving, but not so much that you damage the CPU. The screws can then be tightened once the cooler is in place, but be sure to not fully tighten the screws until they are all in place.

Using Thermal Grease on Your GPU

In the case of a GPU, you may also want to apply thermal grease if the GPU is a few years old, or didn’t come with a pre-installed thermal solution. Even if it did come with thermal grease installed, it may not be of the best quality and you may want to replace it.

The first step is removing the graphics card from your computer. As you can probably guess, powering off your computer and removing power cables is mandatory. After this, you can remove the screws keeping the card in place and gently remove the card after releasing it from the PCIe slot.

Next, make sure to blow the card with compressed air to remove any dirt (a small paintbrush is also ideal). To remove the heatsink, there are usually screws on the card’s rear side that must be taken out, potentially along with some plastic clips.

Use a thermal grease remover or isopropyl alcohol to clean the GPU and heatsink, removing any old grease. A thermal surface purifier is also preferable to prevent corrosion and ensure the surface is fully clean.

Now, apply a small amount of thermal grease just like with the CPU, enough to cover the contact area. While holding the heatsink in position, put the screws back in, tightening them fully only once they’re in place, as previously mentioned. Reinstall the graphics card, and you’re finished.

Done properly, thermal grease should last between 5 and 10 years before needing to be replaced, so it’s a worthwhile investment when it comes to the efficient cooling of your system.

While Arctic offers some great thermal grease products, they may not be suitable for your needs. In cases of extreme overclocking, as is common with many of the newer GPUs, the MX range is not ideal. That’s because of its relatively low usable temperature range and thermal conductivity.

It’s good enough for most uses, but if you’re looking to overclock your GPU, you’ll likely want to invest in an alternative, such as Thermal Grizzly’s range. 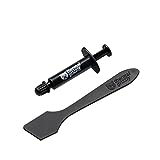 Their Kryonaut and Kryonaut Extreme thermal greases are specifically designed to be used for extreme overclocking. Using a special formula, these greases can withstand temperatures of up to 80C without drying out, ideal for the extreme temperatures reached during overclocking.

To conclude, it doesn’t seem like Arctic’s new MX-6 will be essential when it comes to your CPU and GPU, especially if you’re considering overclocking your system. But as improvements on the MX-5 are expected in the future, it just might be suitable for this case.

For everyday use, you can’t go wrong with an Arctic product, and MX-6 just might be appropriate for the high-powered CPUs set for imminent release. Keep a look out for the MX-6, as we will know more once it hits the shelves.

What is thermal grease?

Thermal grease, or thermal paste, is used to enhance the cooling of a CPU or GPU system by increasing the thermal conductivity between the processor and the heatsink.

A thin layer is applied to the heatsink assembly, which is then fitted back into place. It will last for several years if applied correctly.

What's the best thermal grease on the market?

It really depends on your specific needs, but Arctic offers some great quality products for general use. If you’re looking into extreme overclocking, you will want to opt for an alternative, such as the Kryonaut range from Thermal Grizzly.

These are specifically designed to withstand the high temperatures encountered during overclocking without hardening prematurely.

When is the Arctic MX-6 thermal grease coming out?

The Arctic MX-6 was released at the beginning of November 2022.

What options for thermal grease does Arctic offer?

Arctic offers the MX-2 and MX-4 thermal greases, with the MX-4 being of a lower viscosity than the MX-2. Due to this lower viscosity, MX-4 is easier to apply and remove, making it easier to separate the CPU from the cooler.

MX-4 also comes in a wider range of sizes. Arctic did offer MX-5, which has an even lower viscosity than the MX-4, but was recently discontinued to make way for the MX-6.