The adding machine of d’Azevedo has a simple and reliable construction, but never went into production and remained only on paper.

Let’s examine the mechanism of the device, using the patent drawing.

By depressing a key (marked within the lower drawings) the underlying wheel is rotated. The wheels have different numbers of teeth, according to the key (e.g. the wheel for 1 key has 1 tooth, the wheel for 2 keys has 2 teeth, etc.) The keys are returned in the initial position by means of springs. 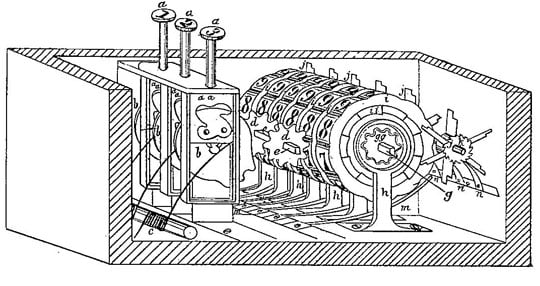 The movement from the wheels will be transmitted to the 10-teeth wheels, mounted on the tetragonal axis. Then, by means of the permanently engaged ratchet wheels and, the movement will be transferred to the result mechanism (the axis which is held in the proper position by a spring), and the result wheels.

The tens carry mechanism is implemented by means of the wheels, mounted on the axis. Fixing the wheels in the position is done by means of springs.

The zeroing of the mechanism is done by turning the knob (on the left side of the box).