Everyone needs a good network and fast connectivity in today’s all-digital landscape. To get a great network connection, you will need a router that is fast and efficient.

While searching for options, you may have come across the AmpliFi Alien and Dream Machine. So, which one is superior?

For many professionals and businesses, your router can make or break your day-to-day performance. Most people would quickly choose AmpliFi Alien because it is relatively easier to set up and use. On the other hand, the Dream Machine is better suited for tech savvies since it has more networking features.

Let’s conduct an in-depth comparison of the AmpliFi Alien and UniFi Dream Machine (UDM) to help you decide which one better suits your needs.

Key Differences Between the AmpliFi Alien and the Dream Machine

Let’s break down what really sets these routers apart.

The Dream Machine is a bit more compact as compared to the AmpliFi Alien.

The AmpliFi Alien comes packed in what seems like a very posh design for a router. Inside the box lies a black cylindrical box with matte soft plastic skin that’s 9.84-inch tall and 4.33-inch wide. It has a 4.7-inch vertical touch screen for you to decide on settings and view details, like port status.

The Dream Machine, on the other hand, is a sleeker router that looks like your standard everyday router in the shape of an egg. This white plastic skin capsule is equally wide and 7.25-in. It doesn’t have a fancy touchscreen like the AmpliFi Alien, and setting it up is just about as tedious as any other router.

Ubiquiti makes sure you have no qualms while setting up the routers. In the case of the AmpliFi Alien, you only need to download the Ubiquiti app, which lets you set up the router through your phone. The mobile app not just allows you to set up remote access to the router, but you can also get access to a few extra features like Teleport VPN and port forwarding.

The Dream Machine can be set up similarly, though it is noisy. You can use the Ubiquity app to set up Dream Machine, as well. Register an account with Ubiquiti and set it up in simple steps that the app guides you through. The app is straightforward, so you won’t have trouble setting your router up.

The AmpliFi Alien uses the latest 802.11ax Wi-Fi 6 technology, which delivers 4x the overall network capacity and 2x the coverage while reaching actual gigabit speeds. It uses a tri-band radio with 2.4 GHz and 5 GHz 802.11ax radios optimized for Wi-Fi 6 performance. It also has backward compatibility with previous Wi-Fi standards.

The AmpliFi Alien is mainly used as a stand-alone router, but you can also add an unlimited number of AmpliFi Alien Routers for use as MeshPoints to expand range coverage. The AmpliFi Alien has a bandwidth of 16 MHz and has DFS channel support. It has a 4-port Gigabit Ethernet switch, touchscreen display, and configuration-free VPN solution.

The Dream Machine has one of the best hardware specifications you’ll find. For one, it has a 1.7 GHz quad‑core processor, said to be “one of the beefiest in the market.” UDM includes an UniFi controller, a 4-port managed Gigabit switch, and a 4×4 Wi-Fi 5 Wave 2 access point.

The AmpliFi Alien is faster than UDM because of Wi-Fi 6 and 12 polarity antennas. If you want to cover a wide area, using UDM might be smarter because the AmpliFi Alien doesn’t work on devices that use Wi-Fi lower than Wi-Fi 6.

If you are not using the mobile app, you might want to check AmpliFi Alien’s web interface. You can access it by pointing your browser at its IP address, which is 192.168.121.1. You have to use the same password as the one on your mobile app.

Now, you can set up the Alien as a router or an Access point and activate various settings, including a DNS-based ad-blocker.

However, this web interface is not for additional things like IP reservation, port-forwarding, VPN, or Parental Controls, and you can’t use it to access the router remotely. Moreover, there’s no Dynamic DNS support.

The Dream Machine’s web user interface, available at its IP address, 192.168.1.1, opens up a different world. There are two separate web interfaces — one for the Dream Machine itself and the other for the UniFi controller it consists of.

The UniFi Dream Machine’s interface allows you to access some essential functions, including views of its hardware, updating its firmware, and changing its name. The UniFi controller interface controls all UniFi devices and allows you to customize your network.

The price difference may be because the AmpliFi Alien has been in demand due to its high performance. The UDM is comparatively new and has a long way to go before it is perfected. There is much room for changes and improvements and probably some more time before UDM can gain equal recognition as the AmpliFi Alien.

Many factors differentiate the AmpliFi Alien and the Dream Machine. The most important are their web interface, hardware specs, price range, and speed.

The AmpliFi Alien was released in 2019 by Ubiquiti. It is aimed at home users and provides a high network speed. To cover a wider area, you need to use multiple routers and mesh APs. Using the Alien for that purpose would provide you with a fast network. It is user-friendly and easy to use, even if you are not very tech-savvy.

The Dream Machine, otherwise called UniFi Dream Machine or UDM, is one in the series of UniFi, released by Ubiquiti in 2022. It has a broad range of functions, and that’s why it can be a little complicated. Since it uses Dual-Band Wi-Fi 5, it isn’t the fastest router out there, but the networks are more customizable, and that is why it is preferred by businesses and people that have to work with networking. 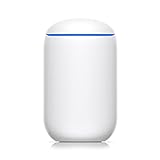 AmpliFi Alien vs. Dream Machine: Which One is Best for You?

The AmpliFi Alien takes the cake as a better router than the Dream Machine. Even though the Dream Machine offers good competition to the Alien, most users prefer faster and easier networking and UDM falls short in these regards. However, since it is still very new, it has room for improvement, and we expect to see some significant changes soon.

Amplifi Alien vs. Dream Machine: What are the Differences? FAQs (Frequently Asked Questions)

Is the AmpliFi Alien better than the Dream Machine?

Yes, the AmpliFi Alien is faster and easier to set up than the Dream Machine.

How fast is the AmpliFi Alien?

Which is faster, the AmpliFi Alien or the Dream Machine?

The AmpliFi Alien is faster because it uses Wi-Fi 6 than UDM’s Wi-Fi 5.

Does the AmpliFi Alien replace routers?

No. The AmpliFi Alien will not replace your cable, DSL, or fiber modem. Alien provides hardware, not internet services.

Does the Dream Machine need a modem?

Yes. UDM is a router, not a modem.

Julie is a writer with a knack for finding the human angle in any story. She has written for some of the world's most prestigious publications, including Condé Nast Traveler, Costco Connection, Delta Sky, HuffPost, Livestrong.com, USA Today's 10Best, and Zagat Stories. She creates content on Tech gadget reviews, cybersecurity, EVs, video games, science fiction, Crypto, history of technology, VR/AR, and Personal tech. As a thought-leadership ghostwriter, Julie helps clients tell compelling stories through blog posts, white papers, social media content, and books. And she's not afraid to get her nerd on - working with UX/UI and CX design teams to produce actionable content.