AMD and NVIDIA have always been bitter rivals. Some years the other one would run away with the lead, but now both of their products are extremely competitive again. AMD has seemed to strike gold with the RX 6800-XT. It is a great representation of the red brand across the board. It is one of the most powerful AMD GPUs in recent history and does not have any asterisks at the end of that statement. In a vacuum, the RX 6800-XT is an excellent card, but how does it stack up against NVIDIA’s RTX 3070?

The question is no longer so cut and dry in this stilted GPU price market. Luckily it seems like we are coming out to the other side of the GPU shortage, but we are not quite back down to MSRP pricing. In this comparison, we will attempt to answer the question asked previously and, ultimately, what card you should get? 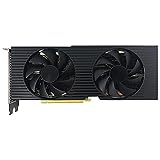 In previous generations, NVIDIA has blown AMD out of the water regarding high-resolution gaming. Still, they are making up ground with the new RX 6000 series and especially the RX 6800-XT. In these results, we are going to look at 4 modern-day games played in 1440p at ultra settings.

The RX 6800-XT has kicked butt with these results. As far as hardware goes, the RX 6800-XT is closer to the RTX 3080, but price-wise, its closest competitor is the RTX 3070. So with an extra $100, you can see markedly better performances across the board in our gaming benchmarks. 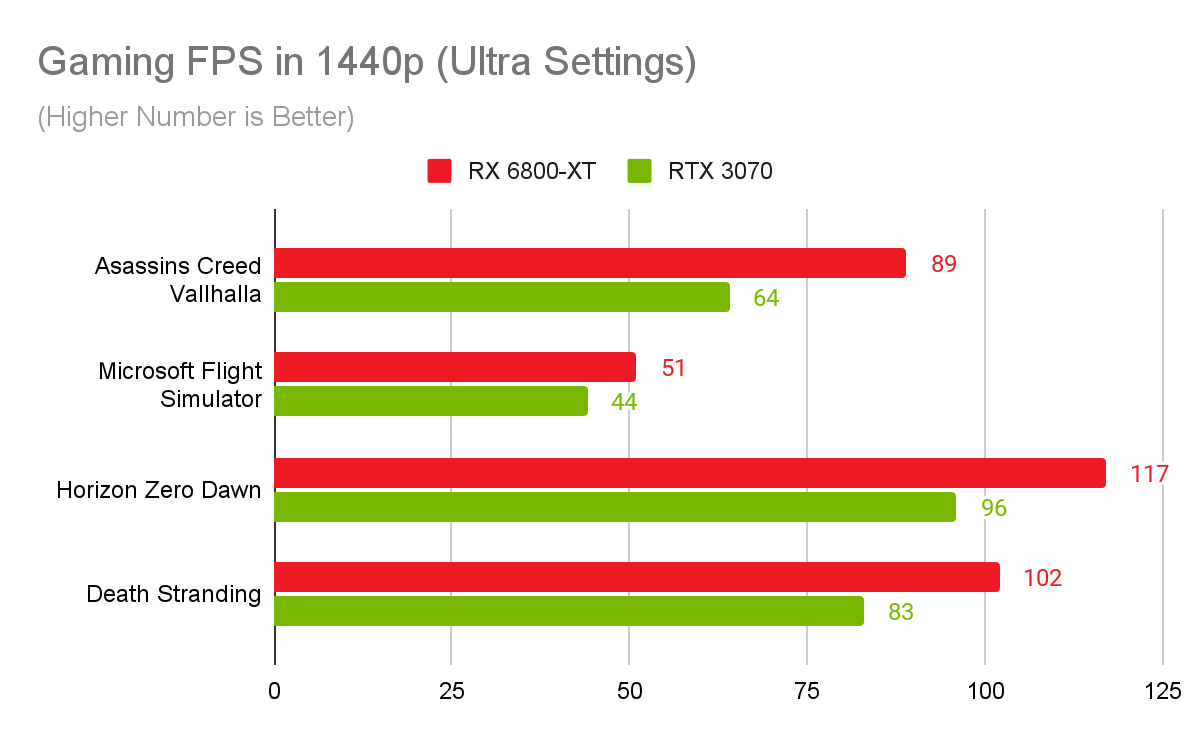 Of course, the NVIDIA RTX 3070 does have DLLS or Deep Learning Super Sampling on its side, which allows you to boost the performance of games by 30 to 50% without seeing a drop in resolution. AMD has tried to come up with a similar offer with AMD FSR of FidelityFX Super Resolution. Unfortunately, while it is an awe-inspiring feat of engineering, FSR does not hold a candle to DLSS, and FSR is not as widely supported as DLSS is.

As much as we would not like to admit it, gaming is not everything. You might be looking at these two cards for your next creative workstation PC. We will benchmark this by taking a look at Blender benchmarks. This test will render three scenes in Blender and then give an overall score for each of the GPUs overall.

As you can see, this is where the RTX 3070 and NVIDIA take back their control. Largely thanks to the RTX architecture. NVIDIA RTX lineup supports Optix, an SDK that accelerates rendering through Ray Tracing. Unfortunately for AMD, NVIDIA across the board for creative programs is more efficient and optimized. For example, Adobe recommends NVIDIA cards for Adobe Creative Suite, so if you are a video editor (or similar), NVIDIA is the way to go. 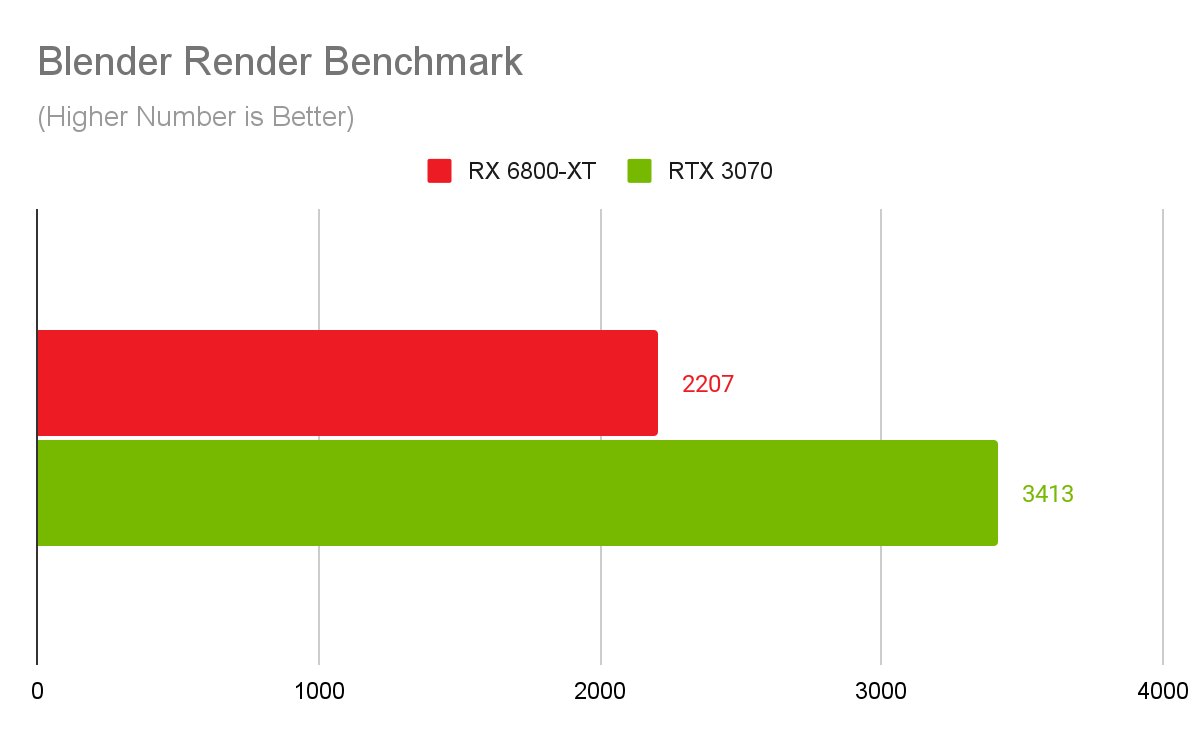 The last performance test we will be looking at is 3DMark’s Time spy benchmark results. This is not a 1-for-1 real-world performance test, but it does give us a good idea of the ability of the GPU to withstand a hefty load for a prolonged period.

This is another great showing for the RX 6800-XT. This is probably due to the 6800-XT’s higher clock speed at 1.82GHz base speed to the RTX 3070’s 1.52GHz and thermal cooling capabilities. Keep in mind that these results do not mean that the RX 6800-XT is a better overall card, just that it can handle the stress test of a synthetic load.

Everybody and their mother is live streaming. If you are looking to upgrade or make a new PC to start streaming or up your game, these cards might be for you. The RTX 3070 and NVIDIA’s NVENC encoder make that decision more or less a no-brainer. AMD’s encoder does not do the RX 6800-XT any favors here.

If you are looking at the RTX 3070 strictly for a streaming upgrade, I would recommend shopping for the RTX 3080 or RTX 3080-Ti. These two are more expensive but will give you a lot more performance when it comes to streaming and playing games at the same time.

If you have looked at NVIDIA’s RTX 3000 series before, you will know that they are all very power-hungry and notorious for power spikes. AMD’s latest series, on the other hand, including the RX 6800-XT, is much more considerate about their power consumption.

Cooling is another place where AMD holds the advantage. The RTX 3070 does pretty well with keeping everything cool in a more significant case, not so much when it comes to small form factor cases. Nevertheless, AMD’s RX 6800-XT is a cool running beast, especially for how powerful it is. I would be much more comfortable putting the 6800-XT in an ITX case than I would an RTX 3070.

Looking at all these results, you might be asking yourself, which one should I buy: The RX 6800-XT or the RTX 3070? I wish I didn’t have to include this stipulation still, but keep in mind that neither of these cards is at their original MSRP. That being said, both of these are at pretty reasonable prices nowadays, which is more than I would have been able to tell you a couple of years ago.

If you are looking to make a new or upgrade a creative workstation PC, I would have to recommend the RTX 3070. Again it’s a case for NVIDIA’s RTX architecture. Until AMD works on making its architecture more optimized for creative programs and 3D rendering, it will be hard to recommend AMD. Not to mention NVIDIA’s NVENC encoder for streaming absolutely destroys AMD’s encoder, which is far behind.

At the end of the day, these are both killer GPUs that make the Red vs Green brand wars fun again and more competitive. So whichever GPU you choose for your use case will be an excellent time, and remember, don’t let someone online convince you that paying upwards of $1,000 for either of these is a good deal.