In today’s article, we are going to discuss two of the best mid-tier gaming graphics cards: the AMD RX 6600-XT vs Nvidia RTX 3060. With GPU prices beginning to stabilize after a long period of chip shortages and inflated prices, now may be one of the best times to think about upgrading your graphics card.

Seeing most graphics cards selling for up to double their original MSRP for the past couple of years makes it a welcome sight to see affordable GPUs once again. With AMD and Nvidia dueling it out to see who can make the better graphics card, you’re probably wondering which GPU is better: the RX 6600-XT or RTX 3060?

We’re going to dive deep into each of these graphics cards, with features, benefits, and full side-by-side comparisons. Additionally, we’ll push both GPUs to the limit with gaming benchmarks to find out which one is the best graphics card for the job. Whether you want a new graphics card for gaming, streaming, video editing, or even mining cryptocurrency, the RX 6600-XT and RTX 3060 should be at the top of your list.

The AMD RX 6600-XT appears to beat the RTX 3060 in several categories, despite having a lower shader core count, and fewer graphics memory. With faster clock speeds and boost speeds, the RX 6600-XT delivers higher theoretical performance than the RTX 3060, with much higher texture fill and pixel rates. But does this higher performance mean it is a better GPU overall?

To understand which graphics card is better, we’ll have to take a look at a brief history to understand where they came from and how we got to this point. With the longstanding rivalry between AMD and Nvidia, it is not often that we see AMD beat Nvidia with a better graphics card. This time things are a little different.

Launching on January 12th, 2021, the Nvidia RTX 3060 was a groundbreaking GPU on its own. Designed to be a direct replacement to the aging RTX 2060, Nvidia made sure to provide some impressive enhancements over the previous generation. With a newer and faster graphics architecture, the new RTX 3060 was a big improvement.

When the RTX 3060 first launched, it had an MSRP of just $329. This is a modest improvement over the previous generation RTX 2060, which launched at $349. In an unusual turn of events, the AMD alternative is slightly more expensive than its Nvidia counterpart. The RX 6600-XT was released with an MSRP of $379, making it the more expensive option.

Although finding these graphics cards anywhere near MSRP since their release has been next to impossible, the AMD RX 6600-XT seems to deliver a better bang for your buck. With higher performance for the money, you may be wondering what sets the RX 6600-XT apart from its competition?

AMD’s graphics cards have always been known to be the energy-efficient choice, and that is no different here. You will be pleased to find that the RX 6600-XT shaves about 10 watts off of its TDP compared to the RTX 3060. The RX 6600-XT will use a maximum of 160 watts under load. In contrast, the RTX 3060 will draw up to 170 watts.

AMD wins as far as dimensions are concerned, offering a GPU with a much smaller footprint. Measuring only 7.5 inches in length, the RX 6600-XT is a perfect fit if you are trying to get as much power as possible into a small PC case. The RTX 3060 on the other hand, comes in almost as large as some of Nvidia’s higher-end offerings such as the RTX 3080 or 3080-Ti. Measuring 9.5 inches in length, you’ll want to make sure you have a roomy case to install the RTX 3060.

Both the RX 6600-XT and RTX 3060 are equipped with a standard array of display connections. Both cards come standard with HDMI 2.1 and Display-Port 1.4a connectors, so you’ll be able to plug in a wide variety of gaming monitors depending on your needs.

You can use your graphics card for anything from video editing to mining cryptocurrency, but let’s face it: most of us are going to use them to play our favorite games. Both the RX 6600-XT and RTX 3060 are excellent choices when it comes to gaming graphics cards, but which one is really better?

To find out, we’ve compiled benchmarks from across the web to put both GPUs to the ultimate test. Since these are mid-tier cards, both of them are considered overkill for 1080p gaming, and they are capable of 4K gaming. For a fair test, we ran benchmarks in 1440p resolution, which is what most gamers will find themselves playing at. Even on the highest settings, we saw some impressive benchmark results:

Both cards are almost identical in most games, and only the most hardcore enthusiast gamers will be able to tell a difference. If you are playing older, less demanding titles, the RTX 3060 will be the ideal card for you. On the other hand, if you want to push the limits with more demanding and newer titles, the RX 6600-XT won’t let you down.

At the end of the day, the RX 6600-XT and RTX 3060 are so similar that no matter which card you go with, you will be happy. Overall, the AMD RX 6600-XT appears to be the winner, but only by a small margin. The only thing holding back the RX 6600-XT is the slightly higher price tag. 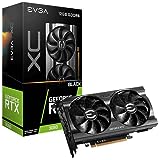 Overall, both GPUs are almost identical, especially when put to the test with gaming benchmarks. The RX 6600-XT does have a slight lead over the RTX 3060, and overall is about 4% faster.

The RX 6600-XT is slightly newer and more expensive than the RTX 3060. It has faster clock speeds and boost speeds but has a lower shader core count and bus width.

The RX 6600-XT was launched with an MSRP of $379, slightly more expensive than the RTX 3060, which launched at just $329. These days, you will be lucky to find these cards at or around MSRP.

The RX 6600-XT is fantastic for gaming, beating the RTX 3060 in more demanding titles like Cyberpunk 2077 and MS Flight Simulator.

The RX 6600-XT can run 4K videos and games, although more demanding titles may struggle at 4K resolution.

The RTX 3060 gets excellent benchmark results for even the most demanding games. The RTX 3060 can even game in 4K.