Coined in the 90s, real-time strategy (RTS) games are a slightly different kettle of fish than turn-based strategy (TBS) games that many are familiar with. Looking for the best PS2 RTS games released? We’ll get into it here. But first, a quick explanation.

While TBS games rely on the player and opposition to act alternately in turns, RTS games allow all players and enemies to act simultaneously in real time. RTS games generally progress by strategically positioning and manipulating several structures and player units. These are mostly acquired through the use of expendable resources.

These resources are accumulated over time, either by activation of certain structures or usage of particular units dedicated to this gathering objective. Games are usually won by controlling certain areas of the map or destroying the opponent’s resources and units.

While several notable RTS games were released for the PlayStation 2 (PS2) platform, these games aren’t really what the console was known for. The PS2 was renowned for its overall great game library, backward compatibility with Playstation, and, perhaps counterintuitively, containing a built-in DVD player.

This allowed users to play DVDs on a system with more than one use, at a significantly lower cost than standalone DVD players at the time. As the popularity of DVDs was rapidly growing during this era, many consumers purchased a PS2 solely for the reason of playing DVDs.

Even with that said, many RTS games were released for this platform and loved by many. Without further ado, let’s get started with this list of the absolute best PlayStation 2 real-time strategy games of all time, ranked by their Metacritic score.

The second game in the Kessen series is largely based on a fantasized version of the 14th– century novel Romance of the Three Kingdoms. This is a sequel in terms of gameplay, rather than the story.

The player takes on the role of general Liu Bei, whose objective is to defeat the leader of the Wei kingdom, Cao Cao, and reclaim his lost love. The game follows many historic battles but with creative license added.

With more of a focus on storytelling and stylistic value (for example, the usage of magic spells) rather than the authenticity of combat, this game aims to be visually striking and user-friendly, which it succeeds at.

The ability to cast meteor showers in order to destroy your enemies, or command an elephant to trample them to death, is quite hard to find as far as RTS games of this era are concerned. This makes the game a notable inclusion to this list.

This game came out in 2006 for the PS2 (also for Microsoft Windows and the Xbox) and was developed by Pandemic Studios. True-to-life combat tactics are utilized to control a squad of 12 units to overcome and eliminate enemy forces.

One team usually contains four units: a team leader, a rifleman, a grenadier, and an automatic rifleman. The story follows Sergeant Eric Daniels as he fights against insurgents in the fictional country of Zekistan, aiming to halt a potential civil war between various sects in the country.

As a sequel to Full Spectrum Warrior, many improvements and additions were included compared to the original. An example of this is the allowance of splitting teams into groups of two, for more nuanced tactical options. The multiplayer functionality is also improved, with added modes and the refinement of online capabilities.

Due to its authentic use of combat tactics and its online multiplayer capabilities, this title brought an innovative and challenging gaming experience that earns its place as one of the best PS2 RTS games. 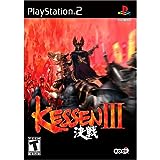 In the third addition to the series, Kessen III, the story returns to its Japanese roots rather than choosing to focus solely on Chinese history as in Kessen II. The story revolves around Nobunaga Oda, a young teenager known for his unconventional demeanor, as he leads forces to defeat the Akechi clan.

Notably, this is one of the few games to depict the historical leader Nobunaga in a positive light, since he is usually portrayed as villainous, or even demonic. Differentiating points of this sequel are the ability to equip units with over 450 weapons and armor and a non-linear mode of stage selection.

With over 120 minutes of movie sequences and a soundtrack by renowned composer Reijiro Koroku, a huge emphasis is placed on cinematic value. However, the strategic and tactical elements are not compromised. This makes the game friendly to both hardcore and casual audiences, and one of the best PS2 RTS games along with its predecessors.

The original in the series, even without the improvements of the sequel, Full Spectrum Warrior scores higher in this list of the best PS2 RTS games. Zekistan is also the focus of the story. It’s tracked as the nation responsible for a violent wave of terrorist attacks carried out across Europe and Southeast Asia.

After an airstrike on the forces of dictator Mohammad Jabbour Al-Afad, US forces are deployed to infiltrate the capital city of Zafarra. The environment is designed to be hostile and intense, with the goal being the completion of various military objectives.

The two teams contain the same four units as in the sequel. What’s more, orders are given using a cursor to control units indirectly. Between holding positions and covering the other team’s movements with suppressive fire, real-life combat tactics must be employed to gain the upper hand.

With its blend of intense action and thoughtful strategy, this game is a must-have for fans of squad-based strategy games. It’s also one of the most innovative titles of this genre available on the platform.

Although the sequels brought new elements to this franchise, the first entry reaches a higher ranking on this list. With a spectacular soundtrack and visuals, this was originally the only game of its kind released on the platform.

The story takes place in feudal Japan towards the end of the Sengoku period. The conflict between the Tokugawa clan and the Totoyomi clan is portrayed. Although, it’s somewhat fictionalized, with Ishida Mitsunari as the leader of the Totoyomi clan. Graphically, the gameplay is immense for its time, with battles containing at least 30,000 units on each side.

It lacks the magical elements of the sequels. However, an emphasis is still placed on cinematic value. Cutscenes have a theatrical atmosphere and are included before each battle commences. If you’re looking for an RTS game with fantastic visuals and depth of story, this game brings these in spades.

It will also keep you occupied for a significant length of time. Kessen is a standout addition to this list. It kicks off this genre on this platform in an unforgettable style, and is one of the best PS2 RTS games.

Despite being a commercial failure, this game is much-loved by fans of RTS games for its story and gameplay. Instead of 3-dimensional graphics, GrimGimoire uses 2D side-scrolling as its basis. While the gameplay can be paused for the player to issue commands, the action takes place in real time.

The protagonist is Lillet Blan, a trainee witch in the Tower of Silver Star, an ancient magic school. The narrative takes place throughout a repeating cycle of five days. Then, the school is attacked by an evil wizard. He aims to obtain the secret Philosopher’s Stone, the player must command units.

These are classed as familiars. These are supernatural entities, as opposed to the more authentic combat units utilized in many other games in this list.

Familiars are categorized into four different laying styles with strengths and weaknesses according to a rock-paper-scissors arrangement. Units have a variety of movement styles. They’re also summoned using the resource of Mana, gathered by members of the Glamour class from crystals found on each floor.

Many players regard this game as fun to play from start to finish. Especially with gameplay bolstered by the inclusion of bonus missions, and beautifully crafted fight scenes. There’s also a range of fantastical beasts to control. As one of the most fantasy-based, elegant, and creative RTS games on this console, GrimGimoire holds its own among others in this genre.

Featuring an alternative theory of history, this game is centered around the period after the end of World War II (WWII), with Japan being occupied by both Soviet and American forces. This splits Japan into two separate countries, with the northern communist government pitted against the southern democratic government.

The game includes the use of mecha fighters, known as Armoured Fighting Walkers (AFWs), and these were placed onto old WWII footage using black and white CGI to add a more authentic feel. While the player takes turns with the enemy to move units around the map to capture locations or pursue other units, combat takes place in real time. This is facilitated by a first-person view of the player’s weapon scope.

Meteorological and day/night elements feature heavily in the gameplay, affording certain bonuses and penalties to the player, such as increases or decreases in base accuracy. The strategic angle of Ring of Red is enhanced by these factors, as well as by the usage of ground troops alongside aircrew. Considering the graphics, multidimensional tactics, and tense combat sequences, this is easily a stellar game for the PS2, if not the best PS2 RTS game of all time.

What is an RTS game?

RTS stands for real-time strategy, and refers to gameplay where players strategically command structures and player units in real time, with all players and enemy forces acting simultaneously.

When did the PS2 come out?

When was the first RTS game released for the PS2?

The first RTS game for the PS2 was Kessen, which was released on launch in 2000.

What was the last RTS game released for the PS2?

The last RTS game released for the PS2 was Nobunaga’s Ambition: Rise to Power, which came out in 2008.