Maybe you have all the specs for a new PC but can’t decide how much RAM your machine needs. Or you’re embarking on a new project and think the RAM needs an upgrade. Either way, you’ll have to pick a RAM size. Computer brands and manufacturers offer different RAM options. Take a 64GB vs 32GB RAM, for instance. A drop from 64 to 32GB is pretty significant. What is gained or lost with a leap this drastic? How does the computer’s performance increase or decrease with a RAM upgrade or downgrade? Is there even a noticeable difference to begin with? Read our

In this article, we explore the differences between these two RAM sizes using full and side-by-side comparison and look at the history of the RAM to better explain its significance. Ultimately, you’ll know how these two RAM sizes compare so you can make an informed decision. 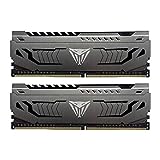 The most obvious difference between 64 GB RAM and 32 GB RAM is their size. The former is twice as big as the latter. Double the size means double the tasks your computer will be able to handle. This bodes well for those running highly involved programs and apps on their computer. A computer with more RAM will simply be able to do more. (And it’ll be able to do it faster, too.)

Higher RAM can also bring a higher CAS latency on average. CAS latency, also known as Column Address Strobe latency, refers to the delay in your computer’s clock cycles. This delay occurs between the system’s READ command and when the data becomes available. The lower the latency, the better, which means lower RAMs have faster CAS latency.

The same goes for first word latency, which describes the speed at which your RAM responds to an action on the desktop. Larger RAMs can sometimes come with slower first word latency. This is just the price one must pay for better memory, it seems. Of course, it’s worth keeping in mind that this is often the difference between a handful of nanoseconds. You probably won’t even notice it.

64 GB of RAM will typically have a higher overall speed than 32 GB of RAM, no matter the latency or voltage being reported. This is often inherent to the very size of the RAM itself. The higher the RAM, the faster the speed tends to be. It’s not a hard and fast rule, of course, but it’s nonetheless pretty dependable.

Another similarity between a 32 GB RAM and a 64 GB RAM is the average voltage. More specifically, both RAM options use comparable amounts of energy. They’re both quite energy-efficient, which is the standard for most computer products. That means you’re getting super high speeds without draining exorbitant amounts of energy in return.

Your RAM should be future-proof. This means that the amount of RAM you have should be able to handle any future technological advancements, so you’re not left high and dry with a slow computer only a couple of years after purchasing an expensive laptop or desktop computer. More RAM means better future-proofing, making 64GB better suited than 32GB RAM.

History: How RAM Has Changed Over the Years

In the early days of computing, back in the 1940s, RAM was predated by CRTs (or cathode-ray tubes). The Williams tube was the first example of this. It was capable of storing anywhere between 512 and 1024 bits — a mere fraction of what we’re accustomed to today.

IBM released the world’s first hard drive a decade later in 1956, offering 5 MB of storage for 50,000 dollars. ($10,000 per MB — what a steal!) From there, it was magnetic-core memory. This functioned like a broad form of RAM, becoming the standard for computer memory until as late as the 1970s.

Concurrent to the development of magnetic-core memory was the invention of the MOS transistor (a.k.a. the MOSFET, or metal-oxide-semiconductor field-effect transistor). This invention was both cheaper and more energy efficient, relying on silicon instead of magnets to store information. However, the amount of storage depended on the number of transistors. It took 16 transistors to store a single byte, so you can only imagine how many transistors were required.

Thankfully, RAM is not nearly as expensive or as bulky today. As the history of RAM continued to grow more and more advanced, so did computers. In the 21st century, computers require at least 8 GB of RAM. However, most lean toward 16 GB or more, just to be on the safe side. (Future-proofing, remember?)

As a protective measure to ensure old RAMs can’t be used in new computers (and vice versa), manufacturers keep each new generation of memory physically distinct from the previous generation. These differences in a generation do a great job of showing how much RAM has changed over the years. This ensures that no older computer gets fried by the sheer amount of electricity needed for the memory to function.

The inverse is also true, to ensure that no newer computer is unable to function due to lack of proper memory. This is where 32 GB and 64 GB RAM come in. With the immense capabilities of today’s laptop and desktop computers, many casual users and professionals alike need plenty of RAM to handle their daily tasks. From video processing to photo editing to video game development and everything in between, more advanced tasks require more spacious RAM.

A computer’s RAM (a.k.a. Random Access Memory) is one of the most critical parts of the entire system. The RAM is arguably the one thing that determines a computer’s performance. Not only does it store all the information your computer’s currently using at any given moment, but it also provides apps and programs a place to do the same.

Used in conjunction with SSDs or HDDs, RAM is what sets the pace for your computer and its performance. Your PC’s performance and speed depend on the amount of RAM installed. As such, the more you expect from your computer, the more RAM you need.

When all is said and done, 64 GB is better than 32 GB RAM. It allows for more memory, better functionality, higher speeds, and more tasks to run on your computer simultaneously. However, does this mean that the average person will need 64 GB RAM for everyday tasks like emailing, browsing social media, online shopping, and streaming movies and TV shows? Probably not.

Most people will do well with 16-32 GB of RAM. That’s not to say that 64 GB RAM, or higher, is totally unnecessary. Some people — like video editors, game designers, IT workers — might need two or three times the amount of RAM as the average casual computer user. At the end of the day, it all depends on what you’re doing and the workload. Use your best judgment based on the information above to make a pick.

64GB vs 32GB RAM: How Do They Compare? FAQs (Frequently Asked Questions)

While it’s not always a guarantee depending on the quality of the product, more RAM tends to mean more speed.

Is there such thing as too much RAM?

While too much unused RAM won’t hurt your computer, it might hurt your wallet.

What's the least amount of RAM my computer needs to function?

Some will say 8GB is enough RAM, but most computer users should have at least 16-32GB RAM to keep their device future-proof for more advanced apps and features in the years to come.

Can you buy more RAM for your computer?

Yes, you can add as much additional RAM to your laptop or desktop computer as you see fit.

While 64GB RAM is better on paper, you probably will be fine with 32GB RAM.